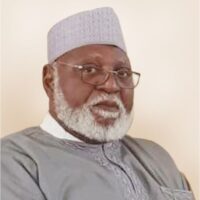 General Abdulsalami Abubakar was born in Minna, Niger State on June 13, 1942. He attended Minna Native Authority Primary School between 1950 and 1956, before proceeding to the famous Government College, Bida for his secondary education. For his post-secondary school education, he attended Kaduna Technical College from January to October 1963.

Imbued with patriotism to serve the fatherland, Abdulsalami enlisted in the Nigerian Air Force on October 3, 1963 as Officer Cadet. In June 1964, he was sent to Germany for flying training. Due to exigencies prevailing at the time, he was seconded to the Army and commissioned Second Lieutenant and was posted to the infantry. By dint of hard work, he progressed steadily in the service, earning his promotions regularly and becoming a General on the 9th of June 1998.

From 1967 he held various staff and command appointments ranging from platoon, company, battalion and Brigade Commander. He became General Officer Commanding in 1988 and was posted to 82 Div after being Military Secretary from 1986 to 1988. He was appointed Commandant National War College from where he became Chief of Defence Staff from 1993 to 1998 when destiny made him Head of State and Commander-in-Chief of the Armed Forces of the Federal Republic of Nigeria in 1998.

His numerous national and international decorations and awards include Forces Service Star (FSS), Meritorious Service Star (MSS), Distinguished Service Star (DSS), Grand Commander of the Federal Republic (GCFR), Companion of the Star of Ghana, Medal of Grand Officer France, Grand Order of Monor of Togo, National Distinction in the Order of the Pioneers of the Republic of Liberia, Grand Maitre des Ordres Nationaux of the Republic of Niger (GRAND CROIX), ECOWAS International Gold Award, The Peace Prize Award by Rainbow Push Coalition USA, The National Distinction in the Order of Pioneers of the Republic of Liberia, Golden Image Award of Liberia, Outstanding Leadership Qualities Award by MABDEC, USA, First Lecture Series instituted by the Chicago State University, USA in his honour; and numerous Honorary Doctorate Degrees.

He has a passion for sustainable development and youth empowerment, and his hobbies include football, hockey, squash, jogging and photography.