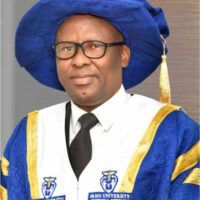 Barr. Walter U. G. Imoedemhe, Ph.D is a trained and qualified Barrister and Solicitor. An experienced and committed University Administrator. He worked as a solicitor with the Law Firm of Esijiomi Rewane and Associates in Lagos, Nigeria after graduation from the Nigerian Law School. He was enrolled into the Nigeria Bar in 1992. Had a stint at the College of Education, Igueben, Edo State, Nigeria where he obtained the National Certificate in Education (NCE) in 1983. Walter completed the National Youth Service at Government College, Maiduguri, Borno State, Nigeria in 1984.

Walter was first appointed into the Nigerian university system as a pioneer Senior Assistant Registrar for a newly created Department of Legal services at the University of Benin, Benin City, Nigeria in 2001. Here, he interfaced with university external advocates, administrative and legal advising, and brief writing and so on.

In 2005, Walter was promoted to the rank of Principal Assistant Registrar and seconded as pioneer Legal Officer/Administrative Officer to kick-start a newly created College of Petroleum and Gas Engineering in Effurum, Delta State, now Federal University of Petroleum Resources, Effurun. On return in April 2007, he was appointed the Faculty Officer/School Secretary, School of Dentistry, University of Benin.

Following a three year bonded Training Leave to undertake a Doctorate programme, Walter graduated with the award of a Doctorate Degree in Public Law from the Ambrose Alli University, Ekpoma, Nigeria in 2017.

It was from the position as Deputy Registrar that Dr Imoedemhe got appointed on 14th December 2017 as Pioneer Registrar, PAMO University of Medical Sciences, Port Harcourt, Rivers State, Nigeria. This appointment propelled him to the peak of his career in the University system in Nigeria.

Despite Dr. Walter Imoedemhe’s busy schedule as Registrar, he has devoted time to writing and has a chapter in a published book and seven (7) articles in journals to his credit. His Law Textbook in print, scheduled for publication is at an advanced stage. Walter is a member of the Nigerian Institute of Management, Chartered, (NIM) and has several University commendations and a certification in Security Surveillance, amongst others.

Dr. Imoedemhe is a lover of sport and an active hockey player and sport administrator. Walter participated in the 6th African Games held in 1995 in Harare, Zimbabwe. He is currently a member of the Nigerian Hockey Federation, a Technical Official of the International Hockey Federation, member of the African Hockey Federation Events and Competition Committee. Walter is the Executive Coordinator, Nigeria Hockey Masters. His most remarkable sports achievement is the Bendel State Sports scholarship Award in 1990.